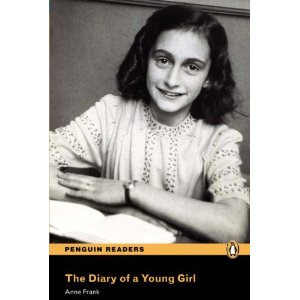 The Diary of a Young Girl: Definitive Edition

I was carried away by the wings of good writing as soon as I set my eyes on the first page of this unbelievable diary. It was written by Anne Frank, a teenage female Jew forced to go into hiding in a secret annexe during World War II. I had the impression that Anne and the unpleasant van Daans, with a grumpy old dentist were quite fortunate to have food and a big space to move about in (though they had to do this very quietly!), but then I contemplated the fact that Jews were not allowed to do so many things, and how difficult it was for the annexe family to stay in hiding and decided that is was probably a lot more horrid. I can’t seem to grasp the fact that an actual girl who had thoughts and feelings just like me wrote this diary, and then died such a tragic death. In the end, Anne doesn’t mention a lot about Peter, but I suppose she had a lot of other things to write about. I wonder what it would be like if another person living in the secret annexe responded to passages and wrote in Anne’s diary.It would probably very interesting to see the life of living in hiding in another persons point of view. When Anne describes being with Peter, she sounds incredibly optimistic, whereas other times she is so despondent you would think she was living in the land of doom. Anne’s diary is inspiring, and her hopes and ideas are interesting, and I was rather glad to know that Anne didn’t want to be a normal house wife, but explore the world, as it would have been a waste of what could have been a joyous and adventurous life if Anne had lived on!This is all true fact, as it is from a real person’s pen, who had survived the dreadful hiding, so if you want a book that is all true but takes you by the shoulders and shakes your feelings about but has a grip on you that is so hard you can’t do anything but read the book, then you will think you have been immersed into a true and tragic life.

Anne Frank, The Diary Of A Young Girl by Anne Frank

2 thoughts on “Anne Frank, The Diary Of A Young Girl by Anne Frank”